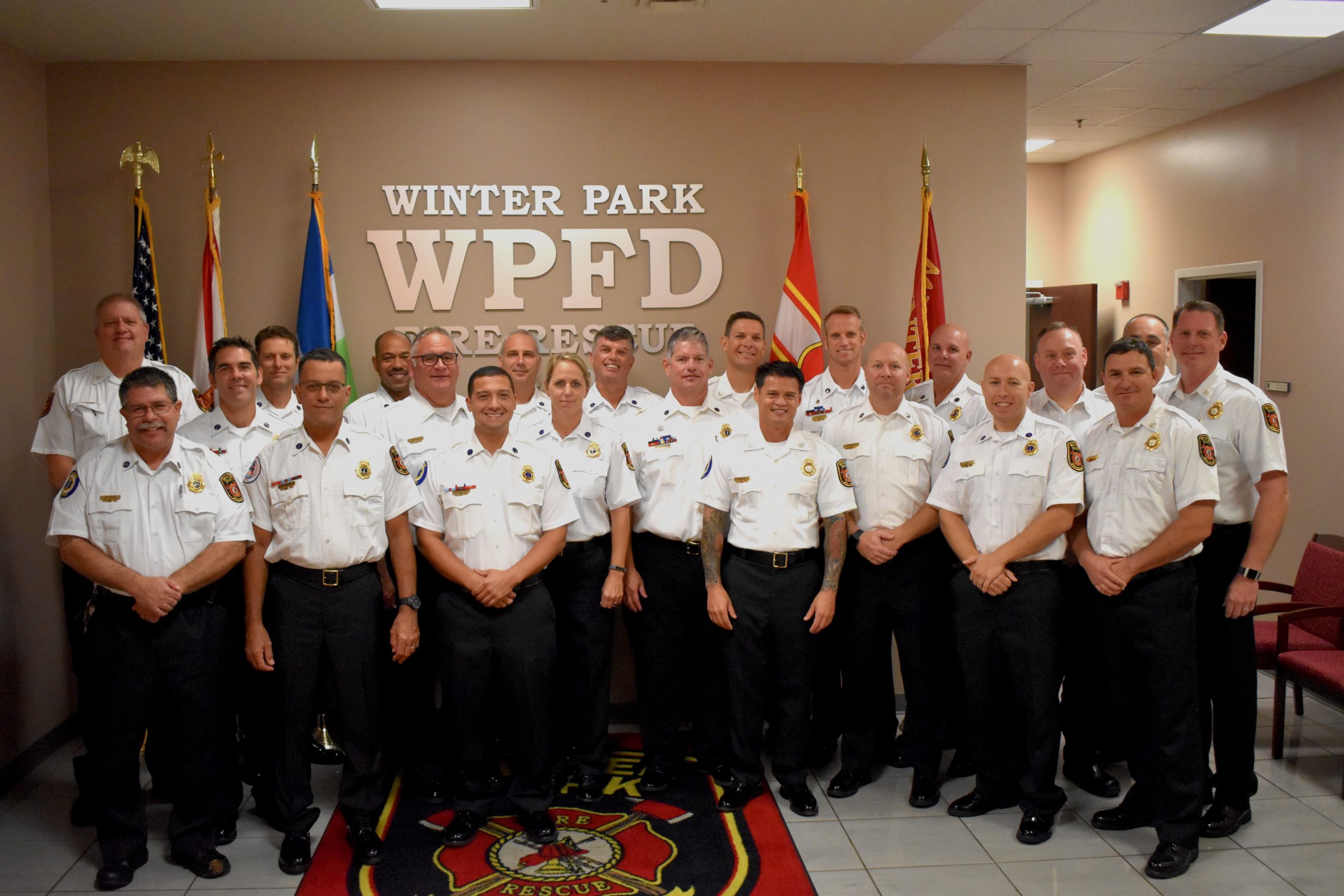 The three fire department battalion chiefs respond to fire and emergency medical calls, maintain records, and statistics pertaining to fire and rescue responses along with company fire inspections, training activities, and the maintenance of facilities and equipment. The battalion chief assigns specific tasks for the lieutenants and crews regularly.

Mark Adams served the Winter Park Fire-Rescue Department as an Explorer from 1981 until becoming a Reserve Firefighter in late 1982. After nine years out of the fire service, Adams returned to WPFD in January 1995. He was promoted to the rank of Lieutenant in 2000 and Battalion Chief in 2007.

Michael Templeton started with Winter Park Fire-Rescue Department as a Firefighter/Paramedic in 1993. He was promoted to Engineer in 2000 and then to Lieutenant in 2003. After spending 12 years assigned to T61, he was promoted to Battalion Chief in 2015.

This position is currently vacant.

The City’s newest facility officially opened on June 6, 2003. The Public Safety Facility contains the administrative operations of both the Police and Fire and Fire Station 61.

Truck 61 was placed in service in fall 2012 as the City’s first Tractor Drawn Aerial. A fully-staffed ALS Truck Company, capable of over 100′ ladder raise, as well as onboard CAFS.

Rescue 61 was placed in service in fall 2015 as a fully staffed ALS unit. Designed with both attendant and patient safety in mind and Equipped with Stryker Powerlift Stretcher and an additional 110volt air conditioning unit for constant temperature control in the patient compartment.

Marine 61 was placed in service in the summer of 2008. It is capable of navigating through the canals and city lakes. Marine 61 is responsible for all water rescues.

This unit is assigned to the on-duty Battalion Chief, who serves as the Incident Commander on scene. It has command unit capabilities as well as additional medical supplies and equipment.

This vehicle is assigned to the EMS Supervisor and serves as the immediate on-scene Medical Control Unit. It has command unit capabilities as well as additional medical supplies and equipment.

Engine 62 was placed in service in spring 2017 and is one of the city's busiest units. This engine carries 750 gallons of water and is equipped with hydraulic extrication tools.

Rescue 62 was placed in service in fall 2013 and is the second of two fully staffed ALS transport units. Rescue 62 is also equipped with Stryker Powerlift Stretcher.

Due to annexations by the City of Winter Park this facility was acquired from Orange County Fire-Rescue in July 2002.

This unit was placed in service in spring 2020 as a fully staffed Advanced Life Support (ALS) engine. Engine 64 carries 750 gallons of water and is capable of delivering 1750 gallons of water per minute. This engine is equipped with hydraulic extrication tools.

For more information on our administration.